Home - teenagers - Belonging to a group in adolescence: they are my friends! 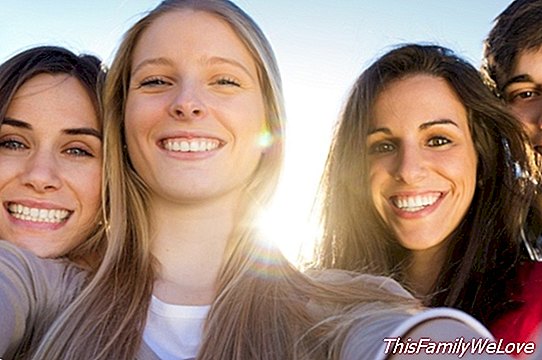 "Who has a friend has a treasure," says the saying and more if we speak is a teenager because, like it or not, at this stage the influence of friends on our children is very important.

The gang of friends plays a vital role in the adolescent's socialization process, but it can also have its risks. We must teach him to say "no" when necessary, but without pretending that our son refuses by system what he does not like about others. This way he would lose his friends.

Belonging to a group in adolescence: the gang of friends

With adolescence, the "gang", with which he will begin to leave in his free time, burst into force in the life of our son. Within the group, he learns to live in society and to differentiate himself from the rest. But sometimes the gang of friends influences the adolescent more than his or her own parents, since we all know that when we go in a group we behave differently than alone.

Is from twelve years When the tendency to seek friendship through gangs arises, which arise in many ways: around the school world, by the proximity of homes in the neighborhood, with the teammates of football or basketball, etc. From the gangs, progressively, deeper relationships will be born: the friends.

Leaders and villains within the adolescent group

The gang of friends has its advantages and disadvantages. One of the risks of these groups of friends is when we do not know very well who the other children are and if we do not take into account the characteristics of our child. The danger is that in these ages there is a need to look for models, leaders and heroes.

Within the group there is a unification of behavior, all tend to act in the same direction, to do the same things. It takes the strength that friends give because teenagers alone are unstable, usually. When one of the friends (one or more of one) stands out for a stronger personality, the rest of the group will follow and imitate him. If the leader is a healthy person, all the friends of the group will enjoy one of the best experiences of his life: a true group of friends.

However, there is a real danger when the leader, or the two or three friends with more personality, they only worry about having fun at all costs, they do not study, etc. In groups like these, our son will not have fun at all: absurd jokes, always on the edge, do what everyone does ... If we talk to him he may realize that it's best that change friends, because we must make him understand that these bad influences are not worth it.

The influence of friends in the gang or outside of it can be very powerful. In fact, it is a proven fact that gangs are one of the best paid land for the propagation of any kind of additions, such as tobacco, drugs or alcohol, for example. The reason is simple, the pressure mechanisms of the gang are very strong, especially when the boy or girl lacks good defense springs. If all the facts have been found during the previous years, it will tend to be the group that decides for him now.

Friends within the gang play with their ability to create feelings of security or insecurity and to isolate or reject who does not follow the rules of the game. At the same time it provides the "courage" that emanates from the strength of the group to experience the forbidden or what individually they would not feel capable of performing. The group "emboldens", prevents individual reflection, justifies the unjustifiable and it dilutes personal responsibility. No one wants to appear as a coward, to be "less" than the others. Laughter, teasing others can become a powerful weapon to break the will of the reluctant.

It is difficult for our son to always stay away from this type of influence. Not even if we know all of our son's friends can we allow him not to be well prepared to face dangerous situations. Although we trust him, we all have the experience that within the group we behave differently than outside of it.

You have to teach him to say "no" when necessary, to be clear about what three or four important situations he should not give up. It is true that we can not expect our son to refuse on a system basis what he does not like about the gang, because that would mean losing his friends. But we do have to talk with our son to help you fix and not compromise on the few "non-negotiable" points and know how to conform to the group in the secondary, in what is only a matter of taste: if pizzeria or hamburger for tea, if playing football or basketball, if the tour is by bike or hiking ...In adolescence one must be clear about the danger of vices, the value of human sexuality, the importance of true friendship, that having fun is not doing the hooligan ...

The gang of friends: they hide for good and bad

Friends, within the gang, encourage each other to act in a certain way. Therefore, we will have to ensure that our children move in a healthy environment, since it is from this one where your future friends and members of your gang will be forged. Thus, in the same way that it is easier to behave badly in a group if the majority or the leader lends itself to it, it is also easier to behave well if all the friends of the gang are healthy boys, with good criteria.

It is essential that parents, let's closely follow the type of relationship that our son and his playmates have during the previous years, what friends he had and with whom he meets now. Parents if we want to take the plunge by the handle can influence from the beginning-without interfering abusively-to help the teenager to choose their friends, but without forgetting that they are those who making use of their freedom should choose who to enjoy in their time free.

My son falls ill to his friends

There is teenagers who do not like, who are always excluded from the group or whose company is avoided; They are those who do not possess a single of the graces that characterize the leader but, on the contrary, repel others with their way of acting. Some are conceited and constantly draw attention to their person.

Others are aggressive, they are always on the defensive, they transmit hostility and provoke it at the same time; they tend to erroneously interpret any social situation in which, in order not to be attacked, they attack first. There are bored in extremes, devoid of enthusiasm, apathetic, have dull the ability to have fun and always strive to water down the party.

The specialists assure that most adolescents who fall ill lack self-esteem, They often fail in their endeavors and suffer serious problems of self-confidence. Therefore, parents should encourage the child to create basic lines of communication and respect for their peers, which stimulate their ability to cooperate and hope, to help you feel useful and valid. Sometimes, the intervention of a therapist can be very useful.